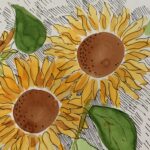 I signed up for a watercolor subscription service. It’s been fun to take up a new hobby! I’ve always wanted to learn to paint. I have a bachelor’s degree in design, but I never got to take any of the 300 and 400 level classes in my specialization, BFA Industrial Design, because I was getting married and had the opportunity to graduate two years early with a BA. Not being stupid, I went ahead and took the BA option thinking I’d go on to graduate school. That didn’t happen — I ended up working to pay for Jared’s schooling because he lost his scholarship a few months after we married.

My first job had fantastic insurance, and the president and vice-president of the company were progressive-thinking woman who would let me bring my baby to work, so I decided to go ahead and have a baby while it was “cheap” and “convenient” (Jared went along in total shock).

After that company went under and Jared took on more of the financial support of our family, I continued contracting on bit 3D design jobs, got into web design, then e-commerce through eBay, and progressed on to my own little empire of websites. In the meantime I went to the temple and felt impressed to spawn another baby. Jared’s work has always involved a lot of very random travel both domestic and international, and it just wasn’t realistic for me to try and pursue any type of upper degree or career while his career was growing and we had children. We got him through college totally debt-free without him ever having to take time off, and I’m proud of it.

But I’ve felt like I missed out most every day.

Now our youngest is a Senior, and I’d really like to spread my wings into some kind of career, but I feel afraid. I think I’m too old — 44 — and I’ve been out of the workforce a long time. What am I if I’m not a full time mom? And who wants to hire a forty year old wannabe with lots of experience scraping pudding off the ceiling but not a lot managing projects and people. To be perfectly honest, I may not even have the patience for it any more. I don’t even know what I want to do anymore. I wanted to design cars, but I’m not sure any more. Maybe travel with the department of state? Get an MBA and go manage something? I’ve watched my older friends get degrees and flit around for years until they settle in on something. I’d rather not putter for a decade if I can avoid it. The women in my family live a long time (these days I dread the thought of a long life — I hope that gets better), and I’d like to have some kind of retirement of my own for when Jared kicks off. Live on a cruise ship, yes. Nursing home, not preferred.

So anyway, I’m paralyzed. Doing this is a way to get back doing some creating and maybe build up some confidence that I still have ideas that done involve the kids — that maybe if I can see the world enough to reflect it, I can also see a spot where I can leave a mark.

That was an unexpected monologue. :)

Yeah, it’s pretty bad. Would not get an A in my classes. But I feel okay about it. It was fun to fail!

The I tried a sunflower tutorial online. It wasn’t great. I got tired out and dropped improving — I had forgotten how often you need breaks when exercising creativity while learning a new technique or skill. Anyway. My final attempt was this:

I drew all over it in pen to make it look less awful. It’s still pretty bad, but I really like pen and watercolor, and this was a reasonable first attempt.

Later I got looking at the picture and decided I could improve some of the petals on the right-most flower:

When I did it, somehow my brain made the connection with Joseph Smith making changes to the revelations or Book of Mormon. The painting was “done”, Sydney thought it was awesome (or said she did), but I saw something that could be improved so I did it. It wasn’t drastic. The overall picture was not changed. But improving your work doesn’t mean the first output wasn’t inspired or that the original that you are trying to reproduce wasn’t perfect. It just means the artist wasn’t perfect and is aware of it.

I realize the comparison isn’t perfect. I mean, I’m not claiming my sunflowers were inspired by God or that they should be part of the revelatory directives for running a religion or that they can save humanity from sin, but I think looking at your work and fixing something about it doesn’t negate the work or the ideas that inspired it. It’s just an acknowledgement that you may lack the skills or eyes to make something “perfect” on your first attempt, you think the output has some overall value. Changing it is an improvement, not a rejection. It may not even be a correction.

Anyway, it resonated for me.