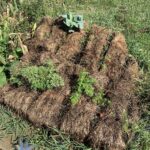 The season has almost ended, and I’m relieved. Today it’s 90 degrees outside, so I didn’t work as long as I probably should have, but tomorrow it’ll top out at 80 degrees. That’s when I’ll put out the new plants I bought Friday.

My friend, Susan, who is a Master Gardner, invited me to go along with her to the Richmond Plant Sale at the Lewis Ginter Botanical Gardens Friday. I bought several plants including 2 sunchokes, 6 fans of day lilies (3 blue), onion, leek, kohlrabi, 6 hellebores, and some pink flower I can’t remember the name of. I’m super excited to get them started.

Today I just cleaned up and watered a bit, plus I picked a few more beans and several tomatoes. A critter has been in the garden over the weekend, so I rearranged the sprinkler and pulled everything that was blushing. I got 20 tomatoes I guess, plus some cherries. The tomato plants that I saved have started to bounce back and are producing again. Del’s tomatoes are producing or ripening, and I should get to try at least one of each variety. I think I pulled two scarlet runner beans today — if they have hairy pods, that’s what I got. If not, I may have a creepy mutation…..

The garden of Eden beans are going to seed, and some of them are resuscitating, even growing new blooms. I don’t know if I’ll see any more beans before it gets too cool, but I’m not going to pull the vines just yet.

I put in some snow peas at the base of the pole beans on the asparagus side of the trellis. About half of the peas I planted on the other side germinated or at least survived being eaten.

I had dug up some blackberry volunteers Thursday and was going to have Jared put them and my new plants in on Saturday, but he was so tired from his trip and was worried about being behind on his homework that I decided to drop it. Sydney was gone all day on a temple trip, so we just went to Wegman’s and bought steaks and cheese and olives and fruit and sushi and meringues and such to have a feast. I did a new peel and a facial and watched TV, and he did some homework plus the peel and facial (!). He was feeling a good bit better by the end of the day.

So anyway, the blackberry volunteers were dried up by time I put them in today. If they live, great. If not, also fine. Some of the blackberry cuttings I took have started. The first vine I pruned has become a monster, and so I kept on pinching the other primocanes as well. I hope we have a huge amount of blackberries next year!

The second batch of carrot seeds I planted sprouted much faster and much better than the first. I think it’s because the weather isn’t nearly as hot. Here’s what the bales looked like this morning. Pretty weedy:

They looked a lot better after being weeded. About half of the big stuff was actually coming up from the grass around the bales. I had a difficult time pulling up those weeds without disturbing the little carrot seedlings. I suspect I lost and/or damaged a few. But so far the carrots are doing well enough that I think I may have some in a few months. That’d be cool!

The garden looks very tired, and I haven’t made much attempt to stay atop the weeds. They aren’t too bad yet. I’ll pull more tomorrow before I put in the onions and leeks and such so that the new plants don’t have to fight so hard to live.

I think next year I will do squash in some bales so that they can get better sun and drainage. I have a lot of crummy fence stuff around, so I may try to make a little cage to protect the kohlrabi from the deer. It would be cool if that would work.