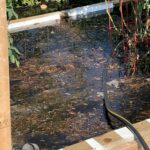 We went to a 13-hour movie marathon at the Alamo on Saturday. I went to the garden before we left and watered the carrot sprouts. We enjoyed watching the Lord of the Rings EXTENDED VERSION until about midnight with Sydney and four of her friends. It was so fun! You wouldn’t think that you could hold up for 13 hours in a movie theater, but it was no big deal. The seats are comfortable, they let us bring in pillows and blankets, and the menu at the Alamo is pretty good, so food was never an issue. I do wish they had more healthy options, however. The menu is kind of heavy for a 13-hour sitting. I ended up ordering carrot sticks (very bad) and fruit (good) from the kids menu since there’s nothing like that on the adult menu. I also ordered the all you can drink soda, but I ended up drinking only one soda in 13 hours. I had a glass of water, too, but I am just not a big beverage consumer. I should have just stuck with ordering by the cup. The themed menu tart was amazing. The sandwich (toast with cabbage and mustard and English sausage) was too spicy for me. But it was so fun! We had an awesome time!!!

Anyway, the next morning I stopped by the garden before church and nearly cried. I had accidentally turned the hose on instead of off, and it ran for 24 hours:

It was Swamp Smith.

To my surprise, some of the radish seeds sprouted under the water. The squash was uphill a little bit and dried up. The container tomatoes were shriveled up, and so were Del’s.

It had been so dry yesterday that even the weeds dried up, so maybe the watering won’t be a total terrible thing:

By Sunday afternoon most of the water had gotten absorbed, and I don’t see anything dead yet. I’ll know in a day or two if there will be any permanent damage.