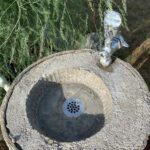 Jared has been working on putting in water and electricity to the garden for me. It rained heavily yesterday, and so it’s easy to see the fixtures with the form wet. Here are some pictures of the thing he built:

It has two potable water spigots, a water fountain, and an electrical outlet. The pvc pipe is the drain for the water fountain, which I asked him to make drain into the asparagus bed so that the drain water wasn’t wasted. He did not test his set up before he started pouring concrete, and it has low water pressure.

He went out there yesterday to take a look at it. He thinks he may have had some rocks in the line. He’s blown at least some out, but today when I tried it the pressure was still weak. If he has to rebuild it’ll cost about $140, so we are trying to salvage what he’s done. I do need better water pressure through the hoses. The sprinkler isn’t working right with the way it is now. Before he did whatever it is he did inside that column, the pressure was super good. I’m hopeful he can get it fixed soon so that I can get going again in the garden.