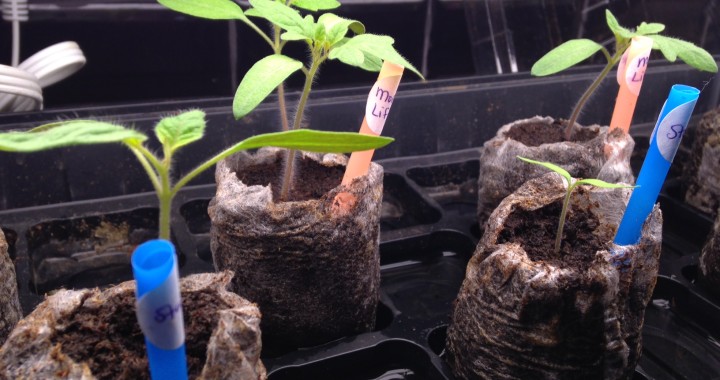 It’s been a few days since I’ve looked at my tomato seedlings, and I’m excited to see that so many of them are looking so good! Several of the seedlings that I thought weren’t going to come up have come up. Right now only the two Italian Roma pucks remain barren. I think they probably won’t sprout — the seeds are 3 years old and weren’t fermented or anything to start out.

I’ve had the hubs watering them the past day or so. It’s a pleasant surprise to see how much they’ve grown in the past days.

I do think that starting the seedlings on the grow light earlier is made a difference on the legginess of the seedlings. This year the seedlings seem to be a lot less leggy than last. Many of the first seedlings to sprout have true leaves on them. You can easily recognize the Stupice tomatoes by their potato-shaped leaves.

This year I started my tomatoes about 2 1/2 weeks later than I did last year. My tomatoes were ready for transplanting too early last year, and I put them in the ground too early. We ended up with two freak hailstorms that really hurt my poor tomatoes. I was able to get them back to life, but there was an incident with some herbicide that killed everything despite my valiant efforts. This year will be better — I can feel it!