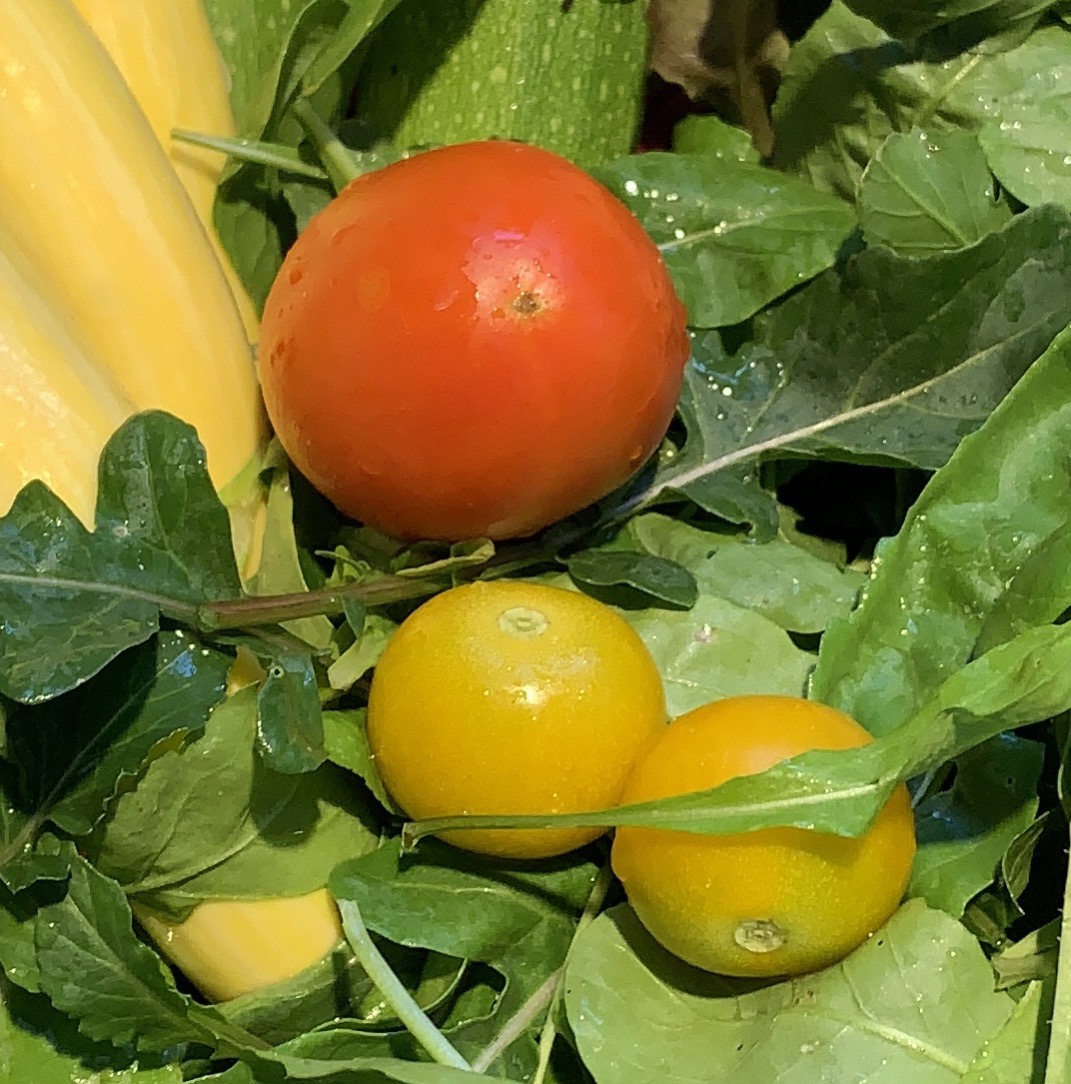 It’s A Thing here in Virginia that those who can get a ripe tomato by the Fourth of July have really accomplished something. Well, here’s my accomplishment:

It’s a ripe saladette, not a slicer, but I’m taking it. I’ve also pulled several Sun Golds as well, but cherries don’t count either.

Fertilized today finally using Neptune’s Harvest. I had started trying to salvage these broken branches the other day, but I decided that it was too hard on them being outside in the nearly 100 degree heat and brought them inside.

We had our kitchen cabinets painted blue last week, and I’ve been trying to get things reorganized while we have most everything empty. It’s been a slow process since Bed Bath and Beyond is closed and everything has to be shipped in from Amazon. I like some of the things I’ve bought for the kitchen and the kids’ bathroom. It’s nice to have something to do, but I still feel the hollowness of what I’m doing.

Today we visited my friend Del. He gave me five pots of several more tomatoes. He doesn’t know what any of them are, so it’ll be a surprise :)

Today I spent several hours updating the website and changing the theme. It was Jared’s last day at work at Sangoma. I don’t know the name of the new place he’s working for — just that they are out of the UK (and we aren’t moving there, bummer).

Today I looked at the sick Bisignano #2 and peppers, gave up, and decided To pull up the plastic between the rows to see if I could get this soggy mess to dry up and resuscitate these plants on the low end of the garden. We had a beautiful harvest of squash today. It was too hot to do very much work, so we went to Home Depot to buy seeds for our fall garden and something to fill in the blank spot on my arched trellis, and we also found a few sick plants that I think we can resuscitate. I love to buy clearanced plants and try to save them. We’ve had some work and others not, but I’m pretty sure we can make these live.

I deliberately let some squash get a little bigger today so that we could stuff it. We used onions from the garden sautéed with sausage, cheese, and the zucchini guts to stuff them. Turned out great!

My friend came over for a visit, and we had a nice talk on the porch watching the fireflies. Love that Angel.

Jared planted the clearanced plants out in the beds today. We have two giant Shasta daisies, a pot of coneflowers, and some red daylilies that all were on sale but looked pretty healthy. The daylilies went in by the septic access and by the water fountain. The Shasta daisies went out front (he finally pulled out that red barberry and dead yew that were in the way). I think they will make the front look a little more symmetrical. The coneflowers went where I usually plant the zinnias. Those zinnias are growing everywhere they shouldn’t because the cat was using that space as a litter box and kicked seeds out into my walkways. I am letting them go for now, but I’ll have to be careful not to let them go to seed where they are.

I bought an Italian oregano plant and put it in my herb pot. The ones I started from seed died while I was on the trip. I also bought the pictures melon plants. We will train them up the trellis in that blank section where the beans died and see what happens. I also planted out four of the tiny tomato plants Del gave me and my remaining spares (Cherokee Purple and what I think is Stupice) into some grow bags. Jared got me some more straw bales yesterday, and we will start seeds out there for a fall harvest. We’ve bought carrot, cauliflower, broccoli, cabbage, Brussels sprouts, and parsnips.

I’ve been watching the tomato clones carefully. Several of the branches have perked back up and are looking great! There are at least four that will live to be transplanted out again — where, I know not. If the sick Bisignano #2 and Atomic Grape die, I’ll just put them in those spots.

We had Five Guys burgers and Cook Out’s watermelon milkshakes to celebrate the Fourth. I also made a huge salad from the greens and lettuce that I had grown from what Del gave me. I thought that the Salad Bowl lettuce had all died, but it turned out Jared had picked it and made a salad and wrap while I was gone. I felt better knowing that at least it had grown. Most of what is out there is arugula and some other peppers stuff, so I decided to cut up some chard and make squash ribbons to put in the salad to cut the pepper taste back a little bit. I also put in our ripe(ish) Sun Golds, the three Stupice, and the three beans I picked yesterday. There’s more than enough for two big salads here — I may need to pick up some shredded iceberg to chase it in tomorrow’s salad.

The kids are all in Wyoming with Jared’s family for the weekend. It’s certainly safer there than in Utah at the moment.

Things haven’t been great here in the US — we are trying to rid ourselves of racist attitudes and it’s painful. Stayed that no longer represent our values are coming down, we are in a pandemic that’s getting worse, and we have a president incapable of leading us toward unity. I’ve been reading The Woman’s Hour, which is about the 80 year struggle American women fought for suffrage. It’s astonishing how slow positive social change is in coming, even here. Even despite it all, we remain the home of the free, and I’m grateful to be living here.