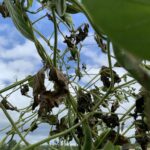 I’m tired of gardening!!! It’s been five months of pretty steady labor and heat, and I’m getting tired. I’m so sick of gardening I didn’t even want to pick tomatoes at Del’s on Friday. I’m just sick of it. This has been one of my best gardens ever harvest-wise, but it has also been one of the most challenging with the deer and groundhog and water issues. I’m getting worn down.

It’s been a week since I about killed the garden by overwatering. Here’s the damage:

The pole beans that got flooded are dead. I am trying to let the Garden of Eden grow until I can save some seeds, but it’s not looking good. The bush beans are also in a terrible state. I pulled a good many beans this past weekend, but I left the smallest ones in case they’d grow a little. They have, so I’ll let them alone and see if they can grow a bit more before the plants completely die off. At least they’ll make decent compost.

I think something ate on the Husky Cherry Red tomato, since it is suddenly completely defoliated on one side. It was probably a deer.

I still can’t get any squash to mature. I’m wondering if it’s the landscape fabric…. but they’re getting blossom end rot. It’s not nice.

But they aren’t dead. The clematis starts I tried seem to all be blackened toast. I can try again now that it’s a little cooler. We have had some unexpectedly hot days, and I know I keep saying this, but I really do think the worst of the heat is past now.

Some of the little seeds for my fall garden are coming up despite their bad treatment. I can see kohlrabi now, plus one or two broccoli, one Swiss chard, some leeks, ONION(!), but no celery. The carrots in the far bale have sprouted a few seeds that I can see — I think. There is some crab grass growing up in the hay bales now. If it gets to be troublesome I’ll pull it out, but right now I’m ignoring it.

I think that I’ll pull up the beans and put in some peas in their place. I hope to put in more broccoli and Swiss chard or spinach this weekend. I’ll also replant the carrots in a last ditch effort to get some to grow in the far bale.

My fall garden might not be much, but I’m okay with that. This is my first time to ever try a fall garden in earnest, and whatever grows, grows. I’m getting tired of gardening, to be honest. I should have sprayed this weekend but did not. I did harvest some tomatoes and tomatillos today.

The zinnias are well past their prime, but I took some pictures anyway: