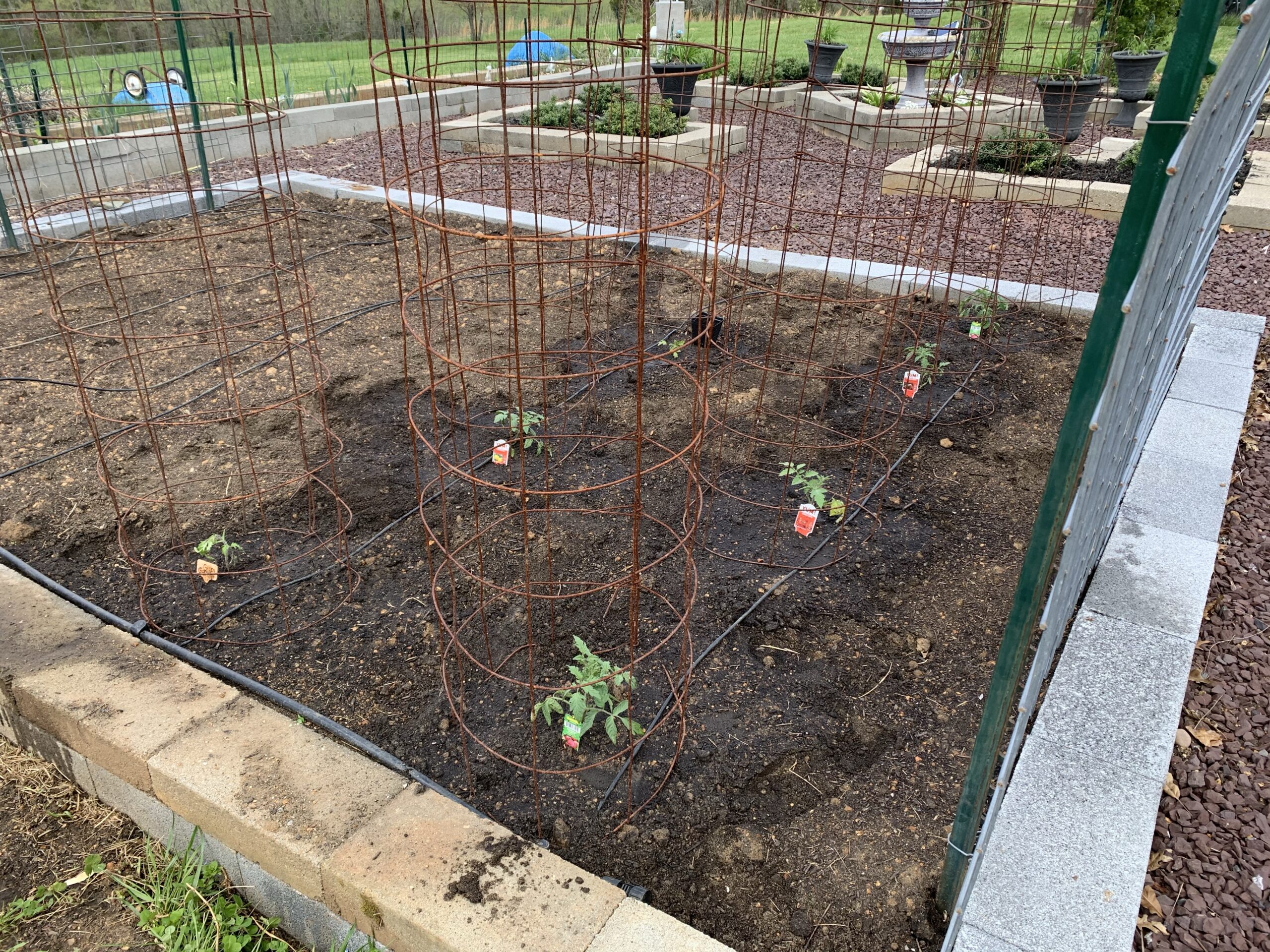 I have not been motivated to do any spring cleaning up this year, and the weeds have taken advantage of my weakness. I’ve got dandelions so big that I could sell greens, no lie, and those are in the FRONT YARD. Arg. I didn’t pull anything in the beds up close to the house because I was hoping the poppies I sowed would come up (spoiler: they have not), so I purposely let everything grow that I wasn’t sure exactly what it was. Well, Mother Nature took advantage of my passive stance, and I am under seige.

So, since the front beds are full of weeds, I did what the Red Coats would NOT do, and I avoided a frontal attack on the beds and planted tomatoes instead. I may start pulling weeds next week, but I may also wait until Sydney gets home so that she can pull. She keeps saying she misses weeding. We shall see….

I realized I forgot to put anything down to prevent the soil from splashing up on the leaves, but I think I can get away with waiting a day or two. I need to make some decisions about how I will handle weeds this year very soon. The plastic kept weeds down last year, but eventually I had to pull it up because it was keeping the bed too wet. I think I have solved the sogginess problem by raising the bed a few inches, but it’s too early to know for sure.

When we first put these beds in I planned to do bulbs in the small l-shaped beds, and so we planted grape hyacinths in two of those beds. What a mistake! The grape hyacinths never did anything but look hideous for months on end, so I’ve been on a mission to kill them for years. If you’re wondering — no poisons work. Pulling the greenery to weaken the bulbs doesn’t work. Grape hyacinths are zombie plants and just keep living no matter what you do. I decided this year I’d get serious and instigate an underground assault. I traced the greens to the soil level and then burrowed down to dig up every bulb I could reach. It is tedious work, but I am very hopeful that I have removed most of the bulbs. To dispose of everything that was removed, services like waste collection dublin can be of great assistance.

I had noticed that the blackberry trellis was looking scroungy, but to my delight, it turns out that the straw mulch actually kept down most of the weeds from last year! I am thrilled! I worked about 45 minutes pulling grassy weeds and transplanting two blackberry plants that were out of line and growing down into the ditch back into formation, but really, prepping that part of the garden was super easy!

In the rest of the garden…

It seems that I lost just one leek when I transplanted those — not bad. The leeks we brought from inside look peaked, but they are not dead. The overwintered leeks are starting to grow again, and I think we will soon have some that are large enough to put in potato soup!

The lettuces and Swiss chard are also growing well. In particular, the butter crunch lettuce we planted from the root end of the plant we got at the grocery store is looking amazing! It’s the prettiest lettuce I’ve ever grown, in fact! It looks so good that we planted another head that came in the mail with our Hello Fresh order this week, and I am anxiously waiting to see if it, too, will grow a nice head of lettuce. The arugula plants I cut to the ground to see if they would come again are mostly growing back. The kale I cut down is not showing any life, but I’ll keep watching it.

The peas are looking very healthy and are using their little tendrils to climb up both trellises. I had worried that the peas were not going to do well because they were so slow to sprout, but I had a great germination rate, and now they are growing like gang busters!

The strawberries look way, way better than I ever imagined. Several ready have sprouted beautiful white blooms, and I actually think we may get a few ripe strawberries this year. It’s hard to see in this picture, but the asparagus looks so beautiful growing up between the little green strawberry plants:

I forgot that I had planted some spinach out in last year’s rotted straw bales, and I have not watered that spot even once since planting. It turns out that neglect is the way to grow spinach, apparently, and that little spinach patch is looking so cheerful!

The Brussels sprouts have taken off during the last week, and they look very healthy. The kohlrabi seedlings I transplanted have not grown too much since moving to their new home outdoors, but only one plant has died all together — I’m taking that as a good sign, and I hope last year’s disaster won’t play out again and I’ll get more than a single bite of kohlrabi.

The garden is well in hand, and I’ll start working on the weeds out front as soon as it stops raining.