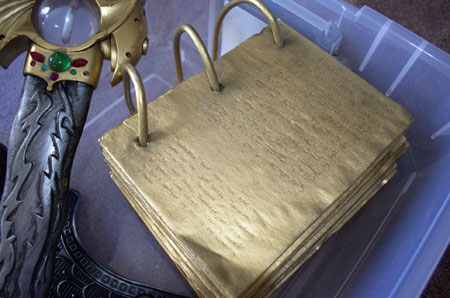 Well, after failing to get any sleep last night, I’m finished with the very first day of my new humongus class of Seminary students.  I lost only one senior and gained 7 Freshmen plus a transfer student and an investigator for a total of 23 kids. It was crazy.

We started out with an introduction to our theme scripture for the year: Helaman 5:12 and the same activity I did last year where the Freshmen query the upperclassmen about Seminary.  This year, the first question was “Why do you get up so early for Seminary?”  It was pretty great. Took about 25 minutes, as planned.

Next we discussed the student reading assignment on the Testimony of Joseph Smith, the BoM title page, and the Introduction to the Book of Mormon.  When we got to the place in the story where Joseph mentions how his vision was so plain he could tell where the plates were, I brought out a digital camera that showed photographs of where I had previously “hidden” a box of “artifacts”. The whole class took a short field trip out to the edge of the soybeans and looked in the box, which I had put under a great big flat stone. I have been working on a sword of Laban and mockup of the gold plates for the past several days.  I bought a dollar store breastplate and attached it to some giant fake gems I had lying around to be the Urim and Thummim. Last year I made a Liahona, so I included that in the box, too.  Tomorrow we will use them as props when discussing the Three and Eight Witnesses to the Book of Mormon. I didn’t allow them to have the plates today, just like Joseph had to wait. They will get them tomorrow.  I will post how-tos for the items in the box later on.  I posted the liahona instructions a year or so ago on Flickr.

This year was a breakthrough in that I wasn’t super nervous as the kids arrived, though I hardly slept at all.  I hope to take a little time today to finish my lesson planning and finish up with preparations at my aunt’s house. My goal is to get next week’s lessons finished tomorrow. I’m excited for a new year of Seminary!