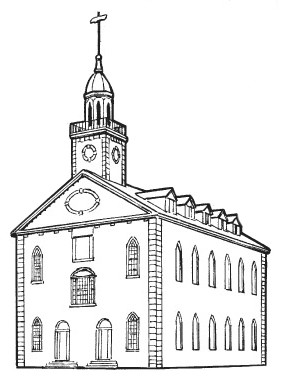 Ha! I found my lesson notes for this lesson!  I am going to back date it so that it shows in order on the website, but really I’m writing this three weeks after I gave the lesson, so hopefully I can remember how it went.

This was the At The Ohio lesson for me, so I spent a good bit of time giving the class an overview of the Kirkland era.  I have listed in my notes several lesson objectives:

D&C 37 – command to gather; lots of people converted in area

I did the following items from the manual (some parts cut out).  I brought some blocks from home for the first part.  This object lesson went perfectly, btw, even though I gave one person more blocks than the other, they ended up making towers of exactly the same height, but it turned out fine:

[Have two students] build a tower as tall as they can.

Give the students one minute to complete the task. Following the activity ask them to evaluate who “won.” After students share their opinions, inform them that in order to determine how well they succeeded in this activity, they will need to study the counsel the Lord gave the Saints as they prepared to move to Ohio. Invite students to look for insights into this activity as well as to their lives as they study the Lord’s directions to the early Saints. …

[T]he Lord commanded the Saints to gather to Ohio. … [because] the Saints were facing [danger] in New York [and]  .. the Lord promised to give to His people [blessings] when they had gathered in Ohio.

In December 1831, Joseph and Emma Smith, Edward Partridge, and Sidney Rigdon move to Ohio.  In D&C 38:32, the Lord promises to give his law in Ohio.  Later D&C 42 is revealed, the Law of Consecration which we’ll cover later (actually we ended up barely touching on this, sadly), etc. …

[At Kirkland] the Lord gave the law of consecration, which is “a divine principle whereby men and women voluntarily dedicate their time, talents, and material wealth to the establishment and building up of God’s kingdom” (Guide to the Scriptures, “Consecrate, Law of Consecration,” scriptures.lds.org). Some purposes of the law of consecration included caring for the poor, eliminating greed, and creating unity among the Saints. …

March 27, 1836, the Lord began to fulfill His promise to endow the Saints with power and they experienced marvelous spiritual blessings. For example, the Lord personally appeared to Joseph Smith and Oliver Cowdery in the Kirtland Temple and declared that He had “accepted this house” (D&C 110:7). He also sent three heavenly messengers—Moses, Elias, and Elijah—to restore vital priesthood keys to the earth. These keys would give the Saints the authority to perform temple ordinances and to seal families for eternity. In addition, the “keys of the gathering of Israel” were restored at this time (D&C 110:11). As a result, missionaries are called and authorized to teach the gospel throughout the earth. …

Explain that once the Kirtland Temple had been dedicated and the keys for the gathering of Israel had been restored, members of the Church began to preach the gospel of Jesus Christ in more places. Invite students to open their scriptures to Map 3 in the Church History Maps section of their scriptures (“The New York, Pennsylvania, and Ohio Area of the USA”).

As students are looking at the map, remind them that the Lord had promised the Saints He would send them forth to preach “among all nations” (D&C 38:33). Explain that Kirtland was an ideal location to begin to send missionaries throughout the world. Kirtland was near several main routes of transportation in the United States. From Kirtland, missionaries only had to travel short distances to access steamboats on America’s major rivers and Lake Erie. They also had access to a national road system to the south and a canal system to the north. Because of this, Kirtland was the point of departure for missions to Canada, other parts of the United States, and Great Britain.

Explain that because of missionary work during this time, the membership of the Church throughout the world increased by thousands. In 1837, Elders Heber C. Kimball and Orson Hyde were called along with five others on a mission to Great Britain, where they baptized around 2,000 people. By 1838, when the Saints left Kirtland because of persecution, there were about 2,000 members of the Church living in Kirtland and nearly 18,000 worldwide. …

read Doctrine and Covenants 42:61 silently. After they have finished reading, point out that after Joseph Smith arrived in Ohio, the Lord told him that he would “receive revelation upon revelation” if he would ask God. Then invite students to turn to the chronological order of contents of the Doctrine and Covenants. Ask them to determine the location where most of the revelations recorded in the Doctrine and Covenants were received…
After students have completed the activity above, explain that at the same time the Saints were being greatly blessed by the Lord in Ohio, Satan increased his opposition against the Church. As soon as the Saints arrived in Kirtland, anti-Mormon critics began to attack the Church.

Invite a student to read the following statement by Joseph Smith regarding these conditions:

Joseph Smith“Many false reports, lies, and foolish stories, were published in the newspapers, and circulated in every direction, to prevent people from investigating the work, or embracing the faith” (in History of the Church, 1:158).

Explain that some of these negative reports were started by some who had left the Church for various reasons. For example, in September of 1831, a former member of the Church named Ezra Booth tried to dissuade people from joining the Church and published nine letters detailing his criticisms of the Church (see Documents, Volume 1: July 1828–June 1831, vol. 1 of the Documents series of The Joseph Smith Papers [2013], 203–4; see also Church History in the Fulness of Times Student Manual, 2nd ed. [Church Educational System manual, 2003], 113–15). These letters increased hostility toward the Church. The persecution resulting from such influences sometimes turned violent, particularly toward the Prophet and other Church leaders. …

Explain that in spite of these and other difficulties, the Saints continued to gather in Kirtland, particularly from 1836 to 1838. However, persecution became so intense during the winter of 1837 and spring of 1838 that most of the Saints were compelled to leave Ohio. Some Church leaders, including Joseph Smith, Sidney Rigdon, and Brigham Young, had to flee Kirtland for the safety of their lives.
as the Lord instructed the Saints regarding their move to Ohio, He gave them counsel on how they were to view one another. Invite students to read Doctrine and Covenants 38:23–25 silently, looking for a phrase that teaches how we are to view other people….

Invite a student to read Doctrine and Covenants 38:26 aloud. Ask the other students to follow along, looking for how the man in this parable treated his sons. …

Ask students to read Doctrine and Covenants 38:27 silently, looking for a principle the Lord wants us to understand from this parable.. …

Explain that the early Church members who were called to gather to Ohio came from varying backgrounds. Some owned successful farms and were respected in their communities, while others had little property and were considered to be of a lower social status.

Refer to the activity of building the tower from the beginning of the lesson. Ask students to restate what the objective was (to build a tower as tall as they could).

Read quote: …“We know from experience that joy comes when we are blessed with unity. … [Our Heavenly Father’s] desire is to grant us that sacred wish for unity out of His love for us.

“He cannot grant it to us as individuals. The joy of unity He wants so much to give us is not solitary. We must seek it and qualify for it with others. It is not surprising then that God urges us to gather so that He can bless us. He wants us to gather into families. He has established classes, wards, and branches and commanded us to meet together often. In those gatherings, which God has designed for us, lies our great opportunity. We can pray and work for the unity that will bring us joy and multiply our power to serve” (Henry B. Eyring, Our Hearts Knit as One,” Ensign or Liahona,Nov. 2008, 69).

I showed this movie about the era, which included the popular stories about Joseph Smith getting tarred and feathered, called Joseph Smith, Prophet of the Restoration from Mormon Channel.org.  I followed the instructions from the manual “[start] about 25:30 and runs until approximately 28:00. If time is available, you could also show the next approximately seven minutes of the film to give students insight into what life was like in Kirtland at this time, the organization of Church leadership, and the building of the Kirtland Temple. In addition, the video depicts some of the persecution related to the Saints’ decision to leave Kirtland.”

This all made perfect sense in my head, promise :).  I don’t usually like lessons that are primarily lecture-style, but this one turned out okay. The object lesson with the tower turned out perfectly, because of the reactions of the students.