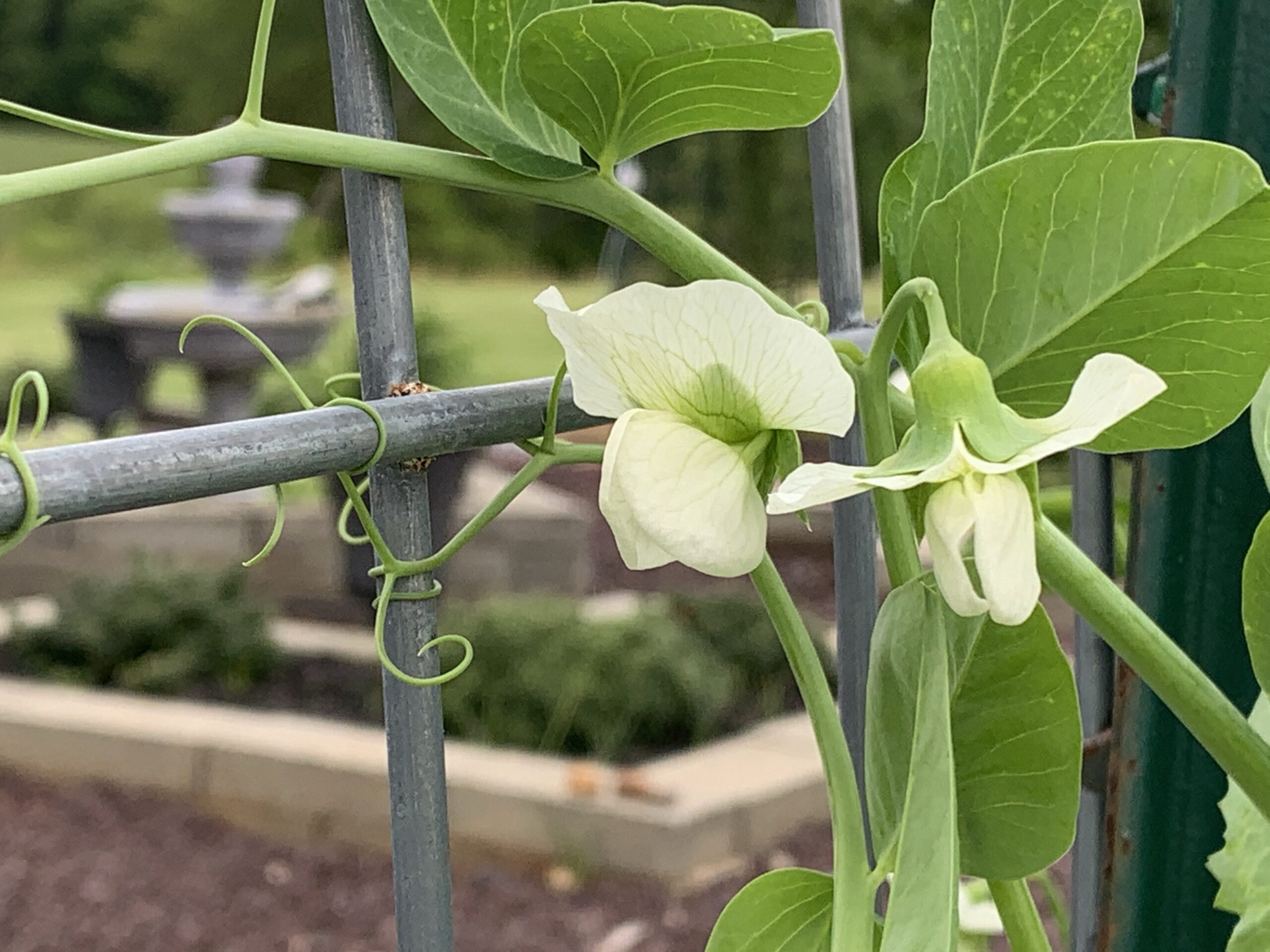 It is chilly here on our sunny hill this morning, but there isn’t any rain in the forecast, so I decided to go out and water the plants and found these:

Aren’t they beautiful??? The white peas are from the Champion of England pea and the purple is Golden Sweet pea which will produce yellow pea pods. I’m excited about both.

I looked carefully at my tomato plants and fertilized the plants that were not fed at planting l. We discovered some little mice had been in the blood meal and eaten most of it up, and they were even eating the heirloom tomato fertilizer. To my delight, the tomatoes that I grew from seed and that had blossoms when planted already have tomatoes!

I have some fairly serious insect damage on some tomatoes due to clover mites — people who say they don’t hurt plants are wrong — and so Jared sprayed again with Pyrethrin. The tomatoes in the bags are looking sickly. I think that they are probably too dry because they aren’t covered or mulched and I confess I have not been watering them with any regularity. I fertilized and watered them today, and I’ll try to keep a better eye on them.

The Brussels sprouts are getting HUGE! Somehow I had it in my mind that they would be harvested at the end of spring, but it turns out they don’t get pulled until Autumn. Oops. I had planted kohlrabi around them thinking I’d pull the Brussels sprouts before the kohlrabi was ready, but that will not happen.

I sprayed the formal beds with some nutsedge killer to try and get rid of those pests. That stuff is the absolute worst — near impossible to kill. I have one bed that is particularly infested each year:

The other lettuces and greens are looking good s one of the Swiss chard has not thrived but I think it’s because I didn’t plant it deeply enough in real soil. They have survived, however, and they are now starting to grow a little more. I could harvest some baby chard now, but I think I will wait until it grows bigger and use up the more tender greens before they bolt.

I did finally pull up the overwintered arugula, but the new plants from this year do not have flowers yet and look very nice. I’ve done a cutting of salad bowl — what a great lettuce!

The asparagus keeps coming, too. I’m not sure when I will stop cutting it yet. Maybe at the end of the month….

My flower beds are looking good, and the roses are starting to peek out. I cut back the phlox and transplanted it all over the yard, and I hope some of it survives since I’ve not been tending it very closely.