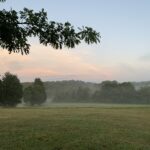 It was stunning outside today! We finally got some rain last night, which was a big relief. This morning when I went to go pick up the girls from Seminary the dew and mist were coming up in the fields. It was so beautiful and peaceful. We are so beautifully situated here:

I went out and worked in the garden for a little while when I got home. I pulled some beans and a few blushing tomatoes. The San Marzano was red enough to pick, and I pruned off the diseased branches on several plants. I did pull the Celebrity, finally, so it’s gone now. I hope the others will survive, but I definitely see late blight on the older plants.

The blackberries I was trying to start have some leaves that are shriveling up, which I thought meant they were probably dying. I had decided to make some more cutting while I was trimming off the dead floricanes for the compost bin.

I hate to admit it, but I didn’t believe all the stuff I saw online saying that if you trimmed the top of the new primocanes it would encourage lateral growth. The pruning I tried for the first two years on the blackberries seemed to weaken them. They did better when I just left them alone for a few years. That’s why I was astonished to see what happened to the canes I cut two weeks ago! I hope this picture shows how this trimmed cane branched out:

After seeing this, I decided that it was a good choice to go ahead and trim the primocanes after all. I cut several more am trying to weave them through my wire guides so that they do nicely next year. It looks to me like the blackberry plant will just make one stupid long cane if it isn’t cut at the top to stop vertical growth. I don’t really know what I did years ago with my pruning that didn’t work, but this year it seems that I’m getting it right.

I saw a couple of volunteers sprouting up in the yard that I will probably have Jared move over to the edge of the yard. I mowed them over earlier this year, but they miraculously survived beheading. That must mean they have healthy roots. I don’t know a lot about blackberries, but you’d think this means the volunteers should take to transplanting.

I got a quick picture of the zephyr squash. It’s growing very fast now! Maybe I will be able to eat it by the end of the week!

The bean trellis is thickly covered now, and I thought it might be nice to take a picture from the inside. It is lots of fun to walk through. I don’t actually know if it makes picking easier or not since lots of beans are above my head and the vines knot and stack up on the top of the trellis, hiding beans, but it is so gorgeous as a landscape element I just don’t care.

My dad bought me one of those light up pest-scaring owls for the garden. I can’t say if it works to scare off animals or not, but I can see its little red eyes light up when we walk past. Of course I can’t know if the ultrasonic sounds are working or not, either. It may just be a battery-operated garden gnome, but I appreciate that he thought of me. If you desire your own garden to be pest-free, you can trust companies such as True Pest Control to handle it with professionalism.

I took a couple of pictures of the zinnias. They are so ugly and so amazing, all at the same time. The butterflies aren’t visiting as often now. I guess it’s past season for them, and they may be migrating to Mexico or wherever.