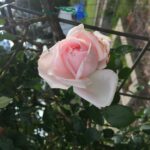 I finally received the beans from that guy I found online. The garden was sopping wet near the bean trellis after the rains — standing water like a pond. So I bought some garden soil to build up that area today, and I put the beans I soaked and inoculated in today. I’ve put in Garden of Eden and Sieva. Garden of Eden is an Italian flat bean I’ve grown before that is amazing. Sieva is a variety I’ve never grown, but my dad sent it to me since Thomas Jefferson grew it in his garden at Monticello, which isn’t too very far from here.

The tomatoes are looking better, but they are kind of crunchy from getting too much rain. I sprayed them again with the fungicide and hit them with a little Miracle-Gro for tomatoes. I’m hoping to get them a little taller so I can prune off the lower leaves that have the spots. They do seem to be better, however, so I’ll wait another week before I decide whether or not to pull them.

The new hybrids that I put in look fine. I pruned the lower leaves and will put some mulch around them tomorrow, I think.

My kohlrabi is looking good! The transplants seem to be alive and growing, so that’s exciting. One more month and I will have tons of that stuff! I love it!

The asparagus had me worried for a while. This week it has produced a grand total of 6 spears. I figured I put it into shock when I cut down all those extra spears Jared let grow up while I was gone.

But today, the crowns rebounded, and I cut a full pound. Yay! I have a few more people that wanted some. I hope to be able to share some asparagus with them. Theoretically we should be able to cut another 3–4 weeks, maybe more.

The New Dawn Rose is almost out. It’s throwing canes out like crazy. I’ve got to get pruning on it next week before it goes crazy.

The clematis I bought to grow up in the new dawn Rose is also out. It grows on the other side of the trellis, where the Rose isn’t, sadly. I could not identify it to buy more for the other side, so I’m going to try and start some from cuttings when I start the new New Dawn Rose in the fall.

My Aldi Rose is out. It has a name — Johnny or something — but I just call it my Aldi rose since that’s where I got it. I have it growing along the back of my house where it’s too steep to mow. It’s a fantastic thing that has filled in the space and looks and smells great!

I’ve cut most of the baby chard, more of the definitely-no-longer-micro greens, and pulled all the radishes. They made for an amazing salad this evening:

This has been a beautiful spring! It’s a real blessing to live where we can grow so many beautiful things. God is good.