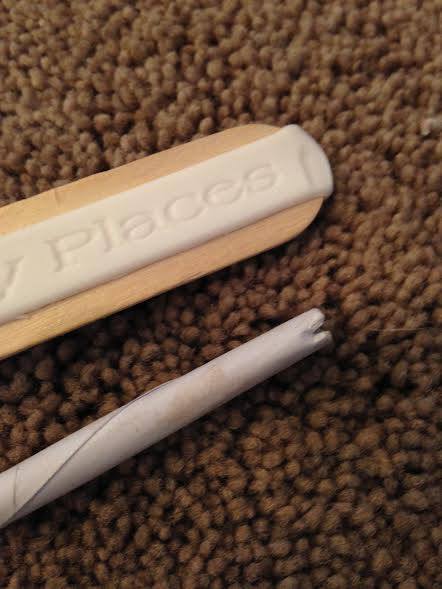 This morning I didn’t prepare a lesson.  A family in our ward’s house burned to the ground the afternoon before this lesson, and not everyone survived the fire.  I expected to have to answer some pretty serious questions from students related to the fire, and so I prepared by reading a couple of articles on grief and tragedy; however, it didn’t seem to be as much of an issue.  Frankly, the kids seemed to not want to talk much about it.  I did handle a few questions and we did have a brief discussion, but it was not was I was expecting.  Maybe our family was just hit harder because we know the family well and because Jared was called to the scene by some ward leadership to do a physical check on the family when we couldn’t get in touch with them.  Anyway, I was expecting this to be a lot harder than it was.

I ended the lesson with a 5-10 minute summary of 3 Nephi 1, emphasizing that this Nephi is the son of Nephi (brother of Lehi) who had just named the murderer of the chief judge.  We also talked about how long it had been from the time Lehi left Jerusalem.  I noted that the book doesn’t seem to say that the people who watched for Christ were going to be killed on the next day — that may have been so — but the text doesn’t come out and say that.  The text just says a day had been set apart for them to put to death, and on that day (the day the death date was sent) Christ spoke to Nephi. (3 Nephi 1:9–13)

After that, I took the kids back to our Helaman 15-16 discussion, and we talked about Helaman 5:12 and how it related to Samuel the Lamanite on the wall. I had students make bows and arrows as you see below:

The bows are made of silicone bracelets with a notch cut out of the center and stretched over a craft stick.  The cutting is to make a spot for the arrows to fit.  The arrows had words the kids wrote that were shafts Satan uses to attack us.  They rolled up the paper tightly and cut off the weak ends and made notches in the end to make arrows.  We shot them at my reactive target Samuel the Lamanite, who could not be knocked down because of the weight.  I just put the tissue tube over a broom handle and laid it across the kitchen cabinets for the kids to shoot at.  Even though subdued, the kids seemed to enjoy this activity.

It seemed wrong to me to do this activity on this day so soon after the fire, but the kids seemed relieved to do it, so I went with them.

One student passed off her 25th Scripture Mastery passage on this day.  She has done all 100 for her 4 years of Seminary.  Awesome.

Again, due to the situation in our ward, I didn’t have much time to prepare a lesson.  Jared took the day off work and he and I spent this entire day helping our friends prepare a spot in their basement for the family to move into.  Jared was there again until very late, but I left around dinner time to get the kids from/to their activities and feed them.  At any rate, I had already planned to continue our Gadianton Robber Chart (we went onto a second page, not shown) from the previous days with these chapters, and that’s what we did.

I had to spend some time on 3 Nephi 3:9 showing students that Giddianhi did know good from evil, that he was not “honestly convince” that evil was good.  I can’t remember how I did this now, but I remember it took some time and patience.

I pointed out the pattern for fighting/protecting ourselves from evil in 3 Nephi 3:13–16 and kids were readily able to recognize it and talk about the application in our lives today:

One kid in particular was on it today, and he spent a good deal of time trying to argue with me that v21 contradicted everything else we had said previously in the BoM.  If we are comparing the wars in the BoM to spiritual wars, this seemed (to him) to say that we should not be assertive about sharing our testimonies with others.  He argued that he always tried to show people that we have something good and that they should come get it, too.  I tried to make the point that this was a real war and the directive to wait to be attacked was in keeping with the other points we had made about the Lord teaching the Nephites they could not attack the Lamanites, only act in self-defense, waiting even until the 3rd attack to return the attack.  Eventually we had to move on, but later this student’s sister spoke up later saying that perhaps the issue was stirring up contention.  If you’re approaching someone in love, the spirit can be with you, but if you pick a fight, the Lord can’t be with you.  Win for her.

We added some more things to our list, and I went back to helping the fire family.  I offered to help with the administration of the Facebook page they created since they were very busy, and also helped them promote a more accurate family statement (the local paper printed an inaccurate, sensationalized version).  I spent the morning with my friend who the family is coming to stay with to try to keep her sitting down more.  She recently had foot surgery and should not be hauling furniture and hiking steps, but of course, she is.  Anyway, I didn’t want her to be fretting alone waiting on the family to arrive.  When we got the text that they were coming, I took a few items we had decided might trigger some more grief, and left.  At that point, the family had only spoken directly with 1-2 ward members, and leaders/members were going nuts planning stuff that had to be canceled when it was refused or not needed.  I think I offended half the women in the ward asking them to hold back and wait.  Some were resentful, thinking that some of us were keeping the family to themselves — I guess so they would be the only ones to serve.  Fact is, the family was so profoundly grief-stricken they just could not even think, hardly even able to move or speak, much less make a decisions about mundane topics.  Even the parents of the family were not informed until the next day after the fire, and extended family members were not in contact with the family for the first 24-36 hours.  We were all working blind.  Our ward has communication issues, and this just enhanced them.  After the newspaper article it got even more crazy, with community members offering help.  Our ward did step up, though haltingly, and had the family outfitted with clothing and the new apartment fully set up — down the curtains and new cable television lines — in about 36 hours after the fire.

Even when hobbled, no one can beat Mormons for reaction time in a crisis.

I know that today we added up our March Madness points (thank heaven the kids reminded me since I was so tired and zoned from all the fire business that I had forgotten).  I’m not really sure what else we did, to be honest.  I don’t have any notes that I can see, though I do remember talking about the breakup of the government into tribes.  I probably faked it using the marks in my scriptures to point out the good bits, but I honestly can’t remember. It’s  been less than a week ago, but it feels like a month.

After class, kid who had argued with me yesterday about the apologized to me.  Apparently his sister had told him he was disrespectful. He apologized, I told him to forget about it, that I liked discussion and I loved him, and things are fine.  He’s made a clear effort to be less argumentative these past few days, and since he’s less oppositional, he’s been able to hear things a little better during our discussions.  This seems to happen with the new kids (the very smart boys, anyway) — maybe I just take a little getting used to. I will not speculate or guess, and I think that some of these boys find that a little hard to understand.  Whatever it is, I think we’re okay. He is capable of jumping ahead to the more difficult nuance of the gospel before I get there with the other kids, and it takes a few minutes for me to lay the groundwork to catch the rest of the group up.  Rarely does it escalate to disrespect if he’ll be patient and give me a chance to respond, and he’s doing better.  A kid who is asking tough questions is thinking about the gospel and ought to be encouraged to keep doing so, in my opinion.

I invited the missionaries to come be our auctioneers for our annual March Madness auction.  This year we postponed the auction a week because of the week of days we missed during March due to snow so that students could earn more Brigham Bucks. The kids spent the Brigham Bucks they have earned over the past month on donated items.  I donated a replica 1830 edition of the Book of Mormon.  Other popular items were a jar of Nutella, a stuffed lamb, a spray can of orange hair color, a pineapple (yeah, the fruit — like from the produce section), and some light up magic wands.

I bought 3 dozen Krispy Kremes, several dozen juice pouches, and made one of those crockpot breakfast casseroles (eggs, sausage, onion, cheese, shredded potatoes).  The kid who won the pineapple donated it, and so we even had fruit.  My husband came down and made gluten-free pancakes for my GF student.  It was a fun day.

We spent maybe 5 minutes talking about the actual reading for this day, because I planned to do something bigger the following day.