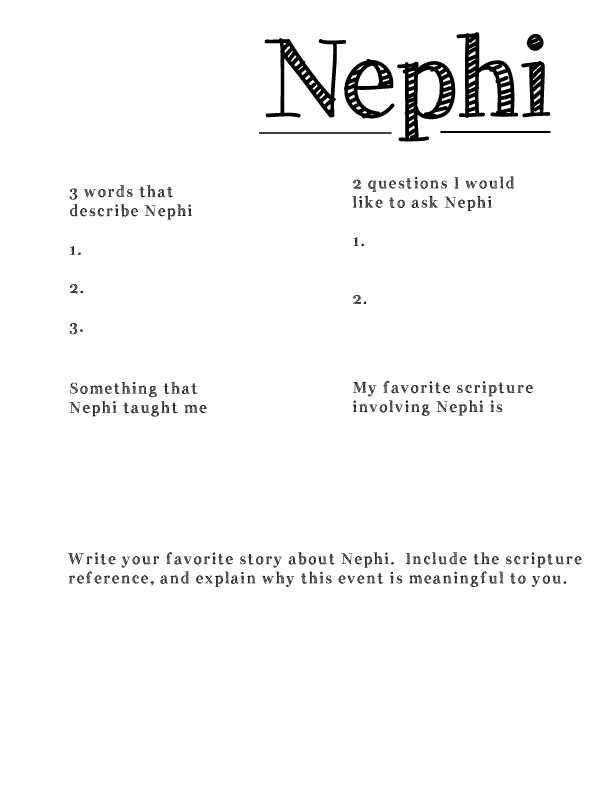 I used the lesson manual a little bit for this lesson, and I can’t say it went super well.  I had a list of verses to read aloud regarding the scattering and gathering of Israel, and we had a short discussion.  I also had students summarize some of the terms from the previous lesson because we had so many students absent, including “furnace of affliction” and “graven on the palms of my hands”. That, in particular, went well.

For the final 10-15 minutes I used the Character Study Worksheets that I got from the Facebook Group to help students review their study of Nephi.  This was a great activity idea, and it worked great in class.  I am getting so many great ideas from the Facebook group!

An interesting thing happend for devotional on this day.  The senior girl that was assigned was concerned that her talk was incomplete.  I told her to go ahead and fake it.  She started with an apology.  I stopped her — this is one of the no-nos that we talked about when writing our devotionals: you never start a talk with an apology or excuse for why you didn’t prepare better.  No one cares, and it comes off like “this stupid talk wasn’t worth time to prepare, so everybody look out the window for the next 5 minutes.”  So then she said, “Just kidding, I am totally prepared!”  I stopped her again.  I’m not suggesting they lie, I’m suggesting that they don’t need to feel the need for full disclosure.  Just do the best you can.  She did, speaking on Alma 41 “wickedness never was happiness”, bringing in an example from her own life.  It was awesome.  I love that the students are figuring out how to give effective devotionals on topics that have meaning to them.  It’s easy to speak passionately when you feel something is important.

My struggling student didn’t bring his scriptures (again), so I handed him my electronic version.  I’ve talked with his mother about her concerns, but I’m not certain that he’s going to stick it out in Seminary. Having a kid in the class that doesn’t love it is making me more sensitive to my flaws as a teacher.  I do let the kids talk and cut up to some degree. We have a lot of fun in Seminary.  Though he’s citing that class is “disrespectful”, I am not sure that is actually his issue.  I will keep praying for him.

Using the introduction in the manual, I gave the students a 2 minute introduction to the second book of Nephi.  Then I pulled out our new stuffed Delilah, and students named her Felicia in about 5 seconds.  That was unexpected.  I was expecting the naming debate we’ve had for the past two years, but nope.  One of my seniors dubbed her, and everyone jumped on.  You just can’t predict what these kids will do.

So today I did Hey, There Delilah, with Felecia.  The kids love this activity.  Basically, I write a list of verses on the board.  The kids toss the stuffed critter to the next person to read, and explain to the class what they think is important or new or what they underlined from the passage.  Works great.

Verses we used from 2 Nephi 1 were

I was really excited that the text of the lesson went so well with a little General Conference introduction.  There was a little bit of unexpected humor from our investigator (who is getting baptized — yay!).  I told the class I wanted to spend a minute talking about General Conference because I wasn’t sure how much our investigator knew about it.  He said he knew a little because he had watched some of the conference from the previous April with the missionaries.  “Basically,” he said, “it’s when the prophets gather in Salt Lake and preach for hours…”  LOL — yeah, I think he knows what it is.  We all got a kick out of this, especially because he said it completely without irony or annoyance, like most of us would have.  I encouraged the kids to watch as much as they can.

Students our classes get 2 absences or 4 tardies makeup work if they watch at least one full session of Conference.

The introduction in the manual wasn’t working for me — AGAIN — because the readiness activities are always based on kids that don’t read.  I decided to drop the lesson again in favor of a format we are familiar with where kids get to do most of the testifying and talking.  Good stuff in this chapter.

The manual also never says “last time we learned” or even makes any attempt to tie the current material with previous material.  Every lesson stands completely alone.  I prefer to tie my lessons into one big whole.  I even bring things back to lessons from previous years: “Remember when we studied this in Old/New Testament?  Tell the class what you remember.”  I am constantly trying to help them see how the scriptures work together and to REMEMBER the things they’ve already learned.

The manual does get kids into the scriptures we are studying more than the old version, but it’s still geared to kids who aren’t reading the material before class. I’m not finding it super useful.  The questions are so repetitive, too.  “How is ____ like ____?”  I have found the subheaders for each scripture block to be so confusing that I have to make a conscious effort to skip them when I study.  For me, a subheader is a statement of the main idea of a passage, the thing we’ll be focusing on with our teaching.  In the manual the subheaders are a statement of the events that occur during the block, which seemingly never have anything to do with the lesson for the block, which is based on the doctrines or principles.  I’ve started reading the little bold sentences FIRST so that I can know where the activity idea is going.  The subheaders just confuse me.

In other family related news, my son combed his hair this morning.  This may not seem like a big deal to some, but in our house, it’s a signal that there is a Special Girl and suddenly combing hair no longer seems unnecessary.  :)

It’s hot out there.  I had to turn on the air conditioner after having it off for the past several weeks.

The government shutdown is getting annoying.  I’ve got friends out of work, NASA shut down their Zero Robotics program that my son has been working on with a group of friends, Skyline Drive is closed which will probably ruin next weekend’s vacation, and even the Farmer’s Markets are being affected because State, Energy, and Ag don’t have the staff to stay open.  Congress, you’re dumb.  The Republicans will loose this one.  I am not sure who is the “strategist” who came up with this idiotic plan, but the GOP needs some new leadership, pronto.